Their beauty is beyond dispute.  No velvet can rival the richness of their falls; or, let us say, it is to velvet only that we may compare them. 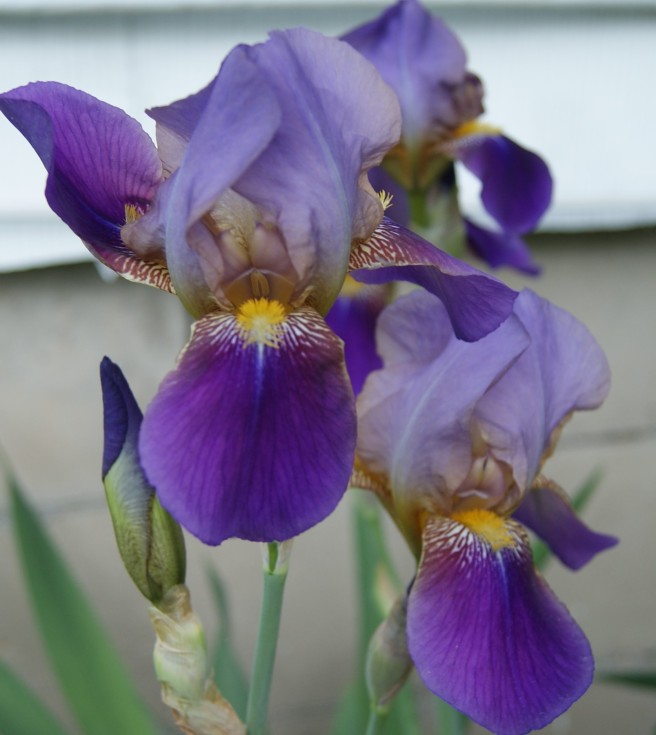 I have thought of planting Iris for a long time, but they are rather expensive.   Out my kitchen window my neighbor’s come up every year and taunt me.  They rent the house and I know she wouldn’t mind, or notice for that matter, if I slipped over there in the middle of the night and split a couple of the neglected rhizomes for myself. Their dog, however, might pose a problem.  I doubt his barking would allow me to do this unnoticed.

Is it naughty of me to speak in this manner?  Perhaps.  But what if I told you I would be helping the iris bloom all the better by doing so?   You see, Iris rhizomes multiply at such a rate that they should be split every three years.  Knowing this, and knowing that others probably have forgotten or neglected this task, I thought about asking friends and neighbors if they would trade me an iris rhizome for one of our dahlia tubers from Italy.  Do you think that trade would suffice?  I should think so.

On my walk this morning I passed a house whose front yard needed a little weeding, to say the least, but it had these gorgeous Victorian purple Iris growing. They are in a rather awkward spot, but I’m sure before the weeds took over their position seemed logical.  I think of all the Iris I’ve seen, I like these the best.  I know of few of the other neighbors in the hood (don’t call it that) have their eyes on some of the other plants on this property.   When the day comes that the owners move and the demolition trucks show up, that’s when we’ll make our move with shovels and picks.

Anyway, if someone is kind enough to trade with you or give you some iris rhizomes, let them finish flowering before putting them through the trauma of being split.   Then, once you plant them, leave a tiny bit of the rhizome above ground so the sun can warm it and tell it what to do.   Vita advises that the plant, “will push itself up even if you do cover it over; but why give it that extra bit of trouble…”

One thought on “Snatching Velvet in the Night”