A dear neighbor brought me a tussie-mussie this week.  The dictionary defines tuzzy-muzzy, or tussie-mussie, as a bunch or posy of flowers, a nosegay, and then disobligingly adds that the word is obsolete.  I refuse to regard it as obsolete.  It is a charming word; I have always used it and shall continue to use it, whatever the great Oxford Dictionary may say…

The other night I set off to visit a friend.  We would share a bottle of wine and some conversation. According to the old rules of etiquette, one should never go to a friend’s house empty handed.  But what does one bring for a casual visit between friends when the wine is already supplied?  Having no time to venture into a store, I thought about my garden.

A garden gives us an abundance of thoughtful gifts throughout the summer.   And when summer is the time most people are out visiting neighbors and friends it seems the perfect setup.  There would be nothing better, in my opinion, than someone sharing a bit of their garden with me.

Vita has mentioned the gift of a tussie-mussie. I would consider a tussie-mussie a sampling of one’s garden, a bouquet of you will, that represents all that is in bloom at present.

So next time you’re to visit a friend, choose instead a gift from your garden, instead of purchasing an object of superficiality.   Rather, you’d be better off saving your money to buy more seeds, because best gifts are the ones nature brings. 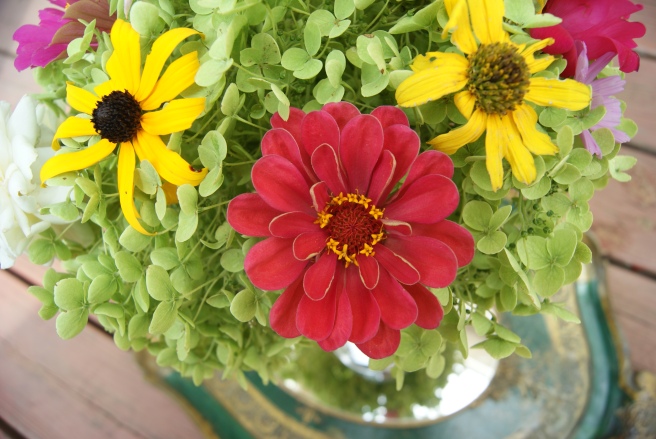 4 thoughts on “What Is A Tussie-Mussie? ”