There is a form of hypocrisy common to nearly all gardeners.  It does not affect only the gentle amateurs, but has been known to affect even the most hardened professional, who is not, generally speaking, a sentimental or squeamish man.  It is the human weakness which, accompanying our determination to rid ourselves of our slugs and snails, makes us reluctant next morning to contemplate the result of our over-night efforts. 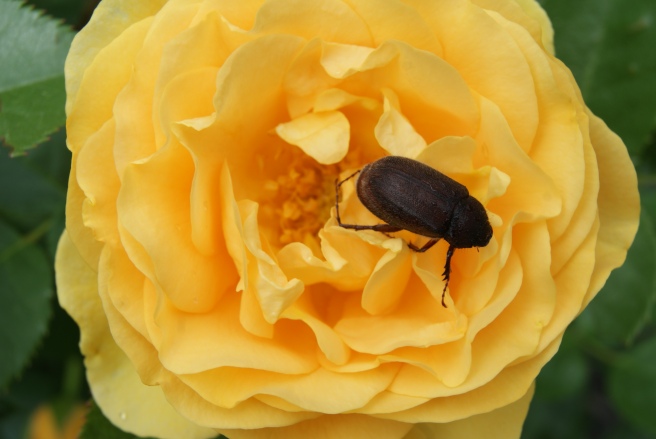 I was sitting out with my husband the other night, which we tend to do a lot in the summer months.   I was telling him about some mysterious creature attacking my roses.  I never saw anything during the day but the next morning the leaves would be almost gone and my buds would disappear.   He gave me a flashlight and told me to go look for slugs.  I had just sprayed everything that day so smugly I took the flashlight not thinking I’d find anything.  I didn’t find slugs, but instead, multiple June bugs were having a slow menacing feast.  They kept on in their euphoric culinary heaven even while I flashed my light on them.  I flicked them off and they all landed on the ground with tiny crackling thuds like they were dead.   I grabbed a jar and gathered them up.  Then I went around knocking all the June bugs I could find into my jar. 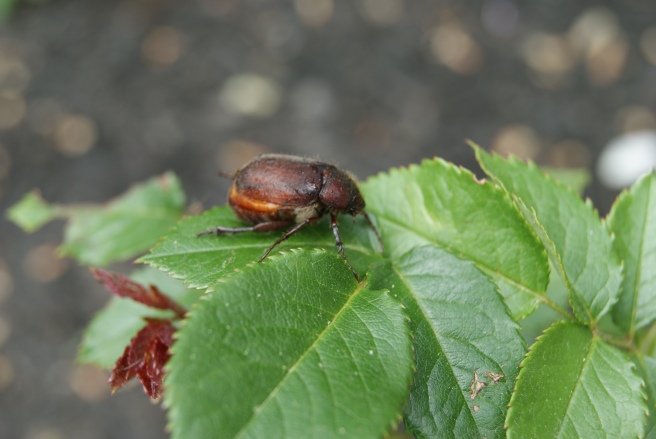 Succumbed to the poison they had consumed from my leaves, all but two were dead.  Or so I thought.  For twelve hours they sat still inside the jar.  Two still squirmed, clambering all over their dead in an effort to free themselves.  I thought it only fair to put an end to their suffering.  I soaked a tissue with alcohol and placed it inside.   It is the same thing I used to do in elementary school when we were assigned bug projects.   But somehow the alcohol brought them all to life again and they ALL began to squirm from the alcohol’s suffocating effects.  I couldn’t believe it.  I didn’t know June bugs played dead.  That’s what they were doing, hoping I’d leave them alone so they could continue their feast.  I promptly placed the jar in the freezer.  Now they are definitely dead.   Do you think I’m cruel?  Perhaps I am.   But I will only say, it is cruel for a creature to take away the health of my rose bushes.   There are plenty of other roses in this neighborhood.  The house next door, for instance, has two neglected climbers.   Since I gathered them, others have yet to find my garden.

If you do have this problem you can use a spray or dust with Seven.  You can also try to catch them in oil with a light, but I think drowning them in oil is just as cruel or perhaps more so.   It is cruel no matter what.  But we are human.  Unlike insects, we registrar thoughts and contemplate life and have to endure every bump and bruise conscientiously and to its full extent and if a beautiful roses bush brings us a little pleasure from all we must take on then God help the creature who treads through our gardens. 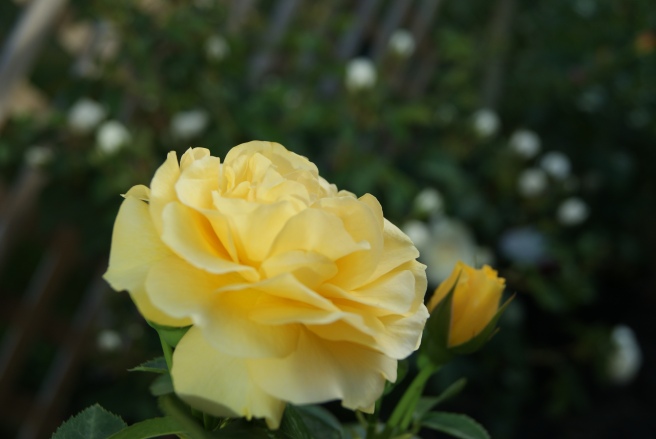