It’s about time to prepare my rose bushes for the summer.  They already budding.  Michigan’s weather has been strangely mild this winter which has caused the flowers, bulbs and trees to burst forth their early buds.  I’m praying we don’t get an ice storm.  I should be researching and learning about what to do with them, but I haven’t because I’m still in hunker-down mode.  Although the winter has been mild we still get our cold days that make me want to curl up and read a book.   So, I have read many so far this winter but what to read next?  Usually I let the spirit guide me, or a book idea I have will flush out one in particular.

“The more one gardens, the more one learns; and the more one learns, the more one realizes how little one knows.”  I like to think this also applies to reading and continuing one’s education which works to brighten one’s curiosity.  I have a library of many books.   The problem, however, with owning so many books is the perplexity of what to read next.  It comes over me and I stand agape at my shelves pulling different ones – reading a couple lines, hastily replacing them with an idea of when to commit myself… I know what I would read again if only I’d allow myself, but what of these other stories?   My next favorite could be among them!  Their contents are a mystery and it is always a risk for me to delve into the unknown.  Only dangerous because once I start I must continued until the tedious end, even if it’s not to my taste.

In a couple weeks I’ll go to Chattanooga, Tennessee to visit the battlefield.  I began studying the Civil War in seventh grade when I read a book entitled Red Cap.  Something drew me to the book.  What was it that made me pick it up off the library shelf when I was twelve and furiously read every word?  What was it that struck me as a young child when I read the tragic story of Ransom Powell and his comrades?   I was so touched by their story that it ignited in me a flame of respect and understanding, as well as a thirst for all knowledge of this violent war.

So with this trip on my mind I suppose I should delve into my arsenal of research books.  I have many and usually by the time we get to the site my husband and I have a general knowledge of how the battle went down.   Unless one visits the site however, it is hard to capture the scope of footwork involved as well as the lay of the land.

When we go to a battlefield the first thing I do is visit the Civil War Trust website and watch the marvelous animated map of the battle.  You can find their whole list of animated maps here.   Then I delve into my volumes of Battles and Leaders of the Civil war which is a first-hand collection of memoirs and letters from all battles and skirmishes.  After scouring the index of all my memoirs I then tap into the index of my 53 volumes of the Southern Historical Society Papers which documented every detail of the Confederacy.  I mean EVERY detail.  It even includes locations of where legs and arms are buried.  This collection was a gift from my parents and I cherish it very much.  Not only are the books beautifully gothic but they smell of old paper with a smack of cigarette smoke – I’m guessing from the previous owner. 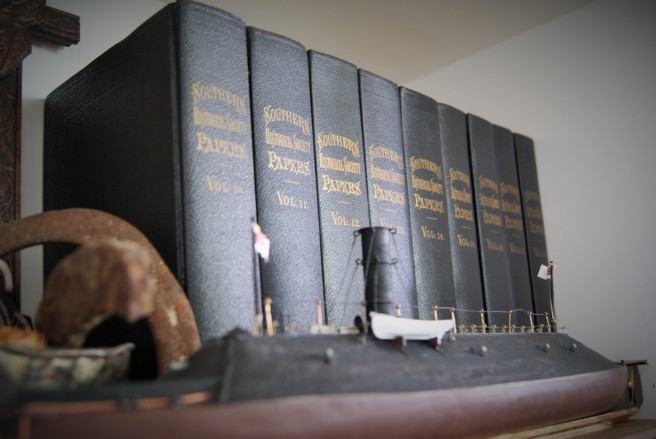 This is the wonderful power books have.  One book transformed my whole life.  I became more interesting and I became interested and curious.  With every fact there were counter facts and myths which I endlessly researched to debunk.   There were biases and shame on men who didn’t deserve their worth to be judged poorly by history’s malice.   Studying the war is an occupation that has kept me occupied for decades and will continue to do so until my death.  What a wonderful gift from such an unexpected source; a child’s book.

What books have you read that peaked your interest and transformed your life?

5 thoughts on “What Books Can Do…”