…As monks will seek in contemplation’s cell
An increment of quiet holiness,
Prolonged novena,- so the Winter gives
A blameless idleness to active hands
And liberates the vision of the soul.
Darkness is greater light, to those who see;
Solitude greater company to those
Who hear the immaterial voices; those
who dare to be alone.

In winter, one tries to distract oneself with projects.  I have begun another novel (I just finished my second).  This one takes place in a jungle- somewhere, I haven’t quite placed it.  I’ve been watching documentaries on South Africa, South America and I threw in one about the Galapagos while I was at it.  I’ve also been listening to a lot of African music and much of Yo-Yo Ma’s silk road project-which takes its listener all over the world and back.  So I don’t quite know yet- and I may just shelf it all together.  Right now, I’m praying for focus since I have another story I shelved a year ago.  To which do I devote my time?   Perhaps spending so much time with my orchids is putting this foreign jungle in my head.  Should I shake it? or let it be?
But the orchid set in rock and rooted in trees – like nature’s intention: their white, moth-like flowers cascading… 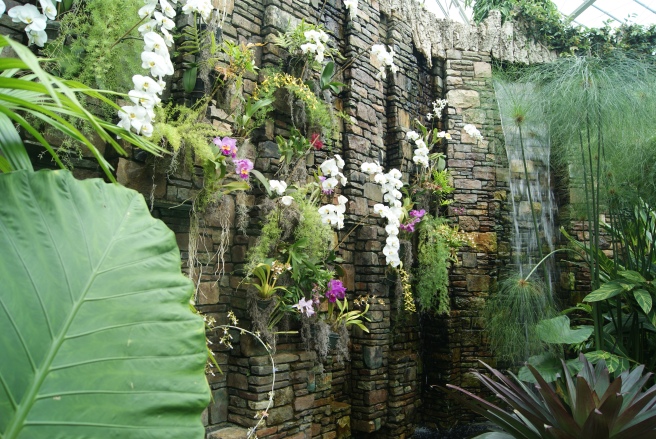 I had a dream last night that my spring bulbs were coming up.  However, I feared not all would not make it.  Then Vita’s voice reassured me by repeating a little known fact: some take two years to really get going.   But what about my hellebores?  Have they begun… I woke up on my way to find them – waking to the harsh reality that I will not find them for another nine weeks.  So again, I must find a little delight indoors. 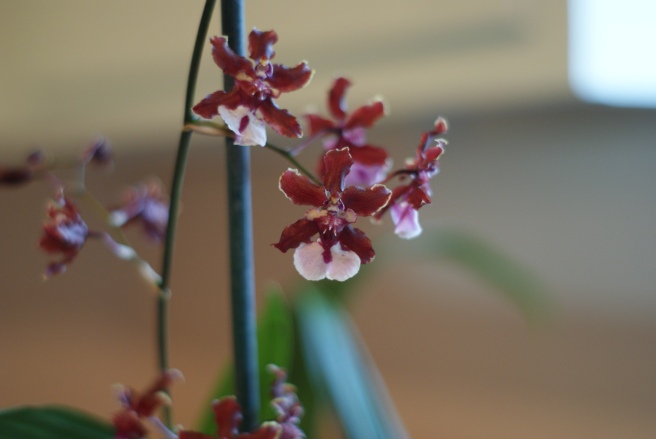 I was delighted yesterday when I saw my chocolate oncidium had shot up a flower spike and will bloom soon.  I have not seen its little dark purple flowers (above) for a year now.  It is called “chocolate”, because their intoxicating fragrance is just like chocolate with a hint of sweet vanilla.   Oncidiums are much like Phalaenopsis where they must be watered once a week and they require a similar atmosphere and light.

The Dendrobium Nobile also require water once a week, sometimes twice a week depending on how dry it is.  They also require a lot of sun and humidity.  But in order to bloom they need a six week drought period.  Mine bloomed two weeks ago… 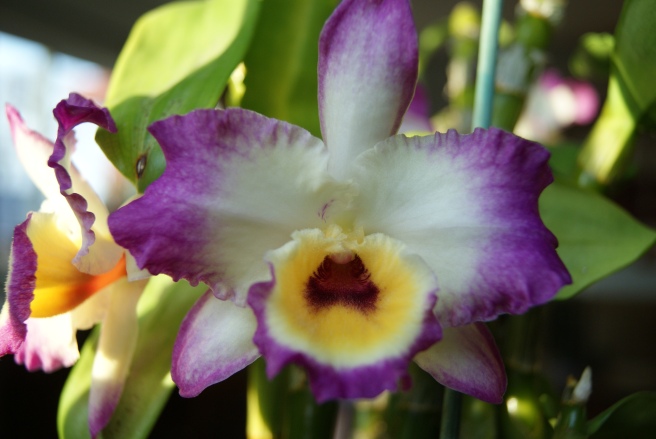 If you have more than one orchid, watering can be a dreadful task-especially if you have to fertilize or if you are using special water.  In my case, I use distilled.  Distilled water is an extra expense and one not to be wasted.  In order to conserve as much as possible I pour a quarter of the gallon-perhaps more, into a large bowl.  First I let my tillandsia soak a bit (but that is another post).  One by one I bring my orchids to their bath; oldest to newest.  Why in this order?  Because my newest are still being monitored for disease.   I water them last in order to keep them isolated from my healthy orchids.   After you’ve had them in your possession for two-three months and you don’t see any evidence of pests or disease, the order will not matter. 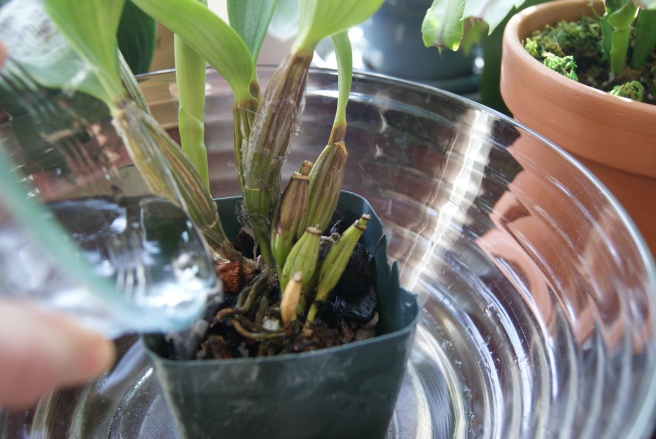 So I will set them in the bowl, and taking a tinier bowl or cup, I’ll lift water onto the roots (only) until they are thoroughly soaked.  I will then let the orchid drain and put it back in its decorative pot by a window.  After watering, some experts recommend you place a blooming orchid exactly in the position you found it so it will not twist its flowers – they will do this to find light. 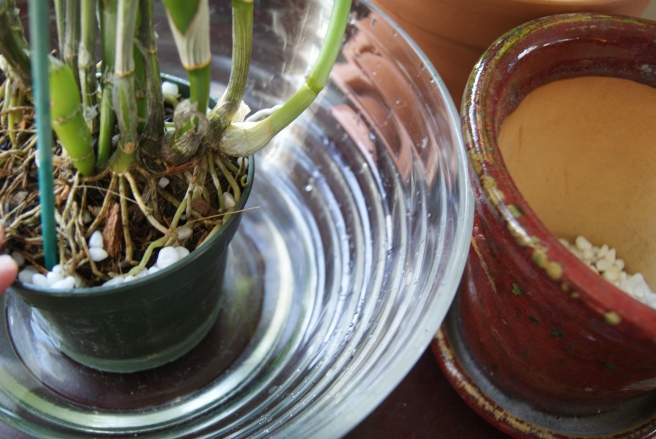 It’s simple once you have a little routine established.  I have a friend who is mother to forty orchids-all phalaenopsis.  She places them all in the bath tub and gives them a “bath” literally.  It’s really what is easiest for you.  She and her orchids don’t seem to mind the chlorine water we have here in Detroit.   I’m sure most orchids can handle regular tap water so make it easy on yourself if you’d like.   They are easy to care for and their blooms last for months – really a great way to occupy yourself until spring.  Perhaps in the meantime they will inspire me to finish what I’ve started in my novel.  Back to the jungle I go… 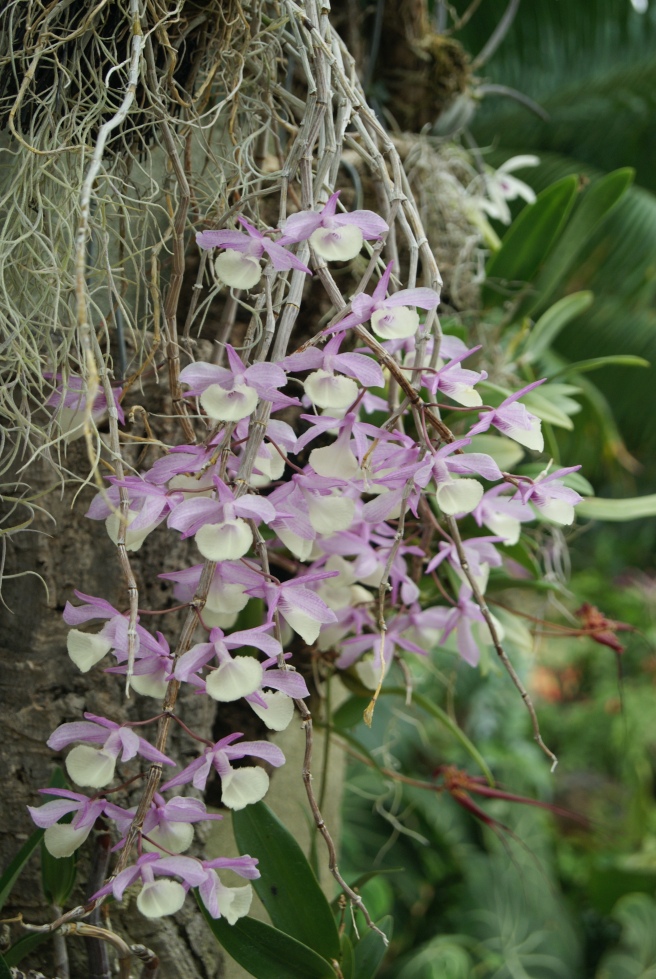