I went to a Christmas party given by a neighbor of mine…All the things appertaining to a cocktail party were standing about, on tables; but the thing that instantly caught my eye was a pot plant of cyclamen I had not seen for years.
Delicate in its quality, subtle in its scent, which resembles the scent of wood violets, it stood there in a corner by itself, looking so modest and Jane-Austen-like among its far grander companions.  It had a freshness and an innocence about it, a sort of adolescent look, rather frightened at finding itself in company of orchids and choice azaleas and glasses filled with champagne cocktails.

I thought that was an interesting glimpse from one of Vita’s many garden books.  They are sometimes more like glimpses into her private life.  Her garden books are quite a pleasure to read if you know someone who might like to take a little journey to Sissinghurst (figuratively speaking).  I read this passage back in June and couldn’t wait to share the idea of giving cyclamen away at Christmas.  It’s such a lovely idea!  If I were ever the recipient of such a gift I would treasure it as I do all my other gifted plants.

My local greenhouse is full of color right now – so uplifting.   I realize it’s almost Christmas and heaps of snow cover the ground, but the greenhouse will never fail its customer; bearing an open wallet and a generous nature.  They have an abundance of different cyclamen right now, so go in and take your pick!   If one takes good care of it, the corms will continue to flower for years.  They can be taken outside in the spring and brought back in when the temperature drops.

Here is what Vita says about the care of indoor cyclamen:
“A pot of cyclamen is a favorite Christmas present, and very nice, too, but by this time (March) some recipients may be wondering what to do with it.  Don’t throw it away.  It will repeat its beauty for you year after year if you treat it right.  Treating it right means (1) keeping it moist so long as it continues to flower and to carry leaves; (2) letting it dry off by degrees after the last buds have opened and faded away; (3) keeping it, still in its pot, un-watered, in a frost-proof place during the remaining cold weeks, and then standing it out of doors, still un-watered, still in its pot, throughout the spring and early summer in a shady place (4) starting it into life again in July or August.  Staring it into life again merely means giving it water again – very simple.”

In addition to this she warns,  if you see a yellowing leaf clip it with scissors, never pull the leaf as you might take a bit of the corm with it.  Also if there is a withering flower cut this also, never pull. 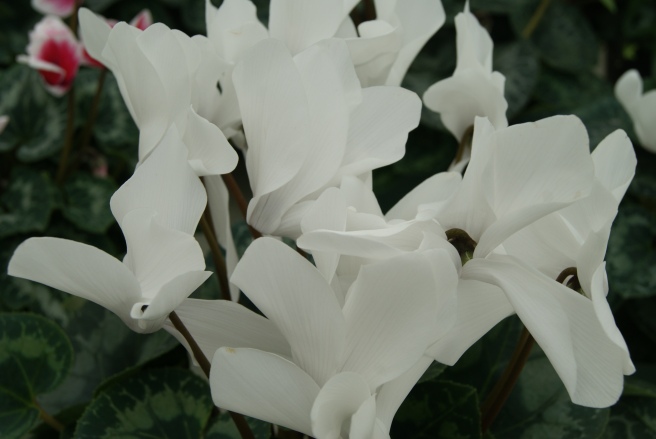 They are beautiful flowers this time of year.  I like the pure white myself.  To me, they are reminiscent of white doves – an appropriate symbol for the Christmas season.  They come in a variety of colors and the frilly ones have a citrus fragrance to them and are quite attractive- like little pink ballerinas.

Hardy cyclamen do exist of course, but I’ve been told in Michigan their success rate is low since the squirrels get after the corms.  I don’t really see why this wouldn’t be a problem elsewhere, but perhaps our soil is easily penetrated, as opposed to the clay soil Vita complained about at Sissinghurst Castle?

Have a splendid holiday season, and do consider giving the gift that keeps on giving- you might just ignite a love for gardening in an unsuspecting relative or friend.

5 thoughts on “The Modest Christmas Cyclamen”