Planting zinnias are a tradition with the women in my family.  I’m not sure who started it but I know my Grandma always planted them and continues to do so.  Along her driveway she’ll sow them in the tiniest narrow space and somehow they come up without completely taking over her driveway.

Every year however, the zinnias take over my garden.  I plant the little seeds not taking into account the gargantuan things they soon become by late August.  The stem spikes and soon branches out to become three feet in width.  Perhaps its because I buy the giant cut-again variety.

They do like to be sown directly in the spot you’ve chosen for them to flower.  All plants do, they become stronger plants this way; staying in the place their roots were first birthed.  The plants are stronger when they are not uprooted.   If you do transplant them however, do so before they reach over two inches tall.  I waited too long and had to water them constantly for two days, otherwise they drooped horribly.  I feared I had lost them all.  In hindsight, although they bounced back, I should have left them where they were.   They would have looked nicer against the house rather than stuffed in my garden with everything else.

The fun of planting them by seed is you never know what color you will get.  It becomes the topic of conversation with my grandmother once hers begin to bloom.  Just the other day, we realized that neither she, nor I have gotten a white zinnia in about fifteen years.     Vita mentions she got too many magentas.  That seemed to be our problem too for awhile, my Grandma and I,  but this year I was happy to see that purple/pinkish color emerge.  The color I was rather sick of however, was yellow!  So many yellow zinnias came out of that package I was surprised, especially the peppermint stick variety I tried this year.  Almost all my zinnias are yellow this season!  I think my Grandma will be shocked to hear it. 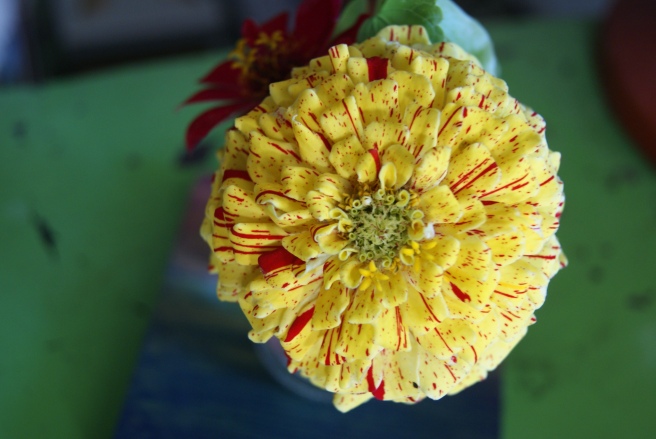 As I mentioned, this year I tried a peppermint stick variety which has been very interesting.  They come out speckled and striped like an abstract painting. They do look rather fake and they continue to look this way even after their stems stop taking in water.

They last forever in water and will dry nicely too.  I have some dried from two seasons ago and they smell wonderful. 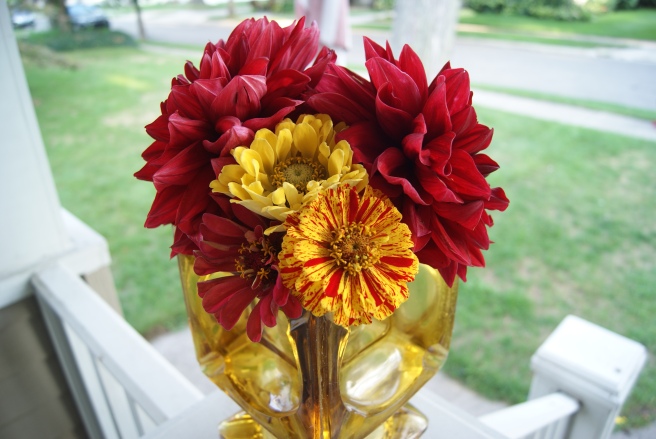 15 thoughts on “The Fakest Flower of All…”